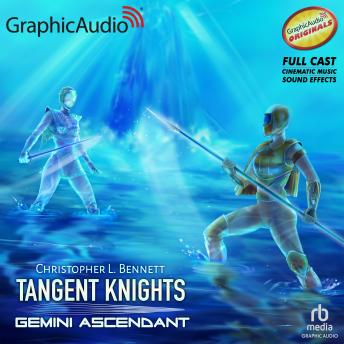 'In a world where communication with parallel tangent Earths, known as “realms”, has brought a disruptive influx of new beliefs and scientific innovation, college-student and fangirl Corazon Kagami continues to discover astonishing new facets to the abilities she’s unexpectedly acquired in the accident that transformed her into Tangent Knight Caprice, the foremost of a growing ensemble of armored super-warriors very much like the heroes and villains of her favorite tokusatsu shows.

After a very personal betrayal, Malika Ramos, AKA Tangent Knight Gemini, finds herself captive of a powerful agency that polices the multiverse for inter-realm threats. They intend to use her as the means to lethally put down what they see as a threat disturbingly similar to the one that all but wiped out the highly advanced civilization of the Cefal. The menace at hand is Malika’s teammate Cory Kagami, Tangent Knight Caprice. And many of Cory’s comrades-in-arms have begun to suspect the danger is real.

Caprice’s ever-evolving, ever more godlike powers have triggered an intervention that will pit warrior against warrior, as Caprice refuses to turn away from a destiny that may save her tragically damaged family, or lead to horrific multi-versal catastrophe.