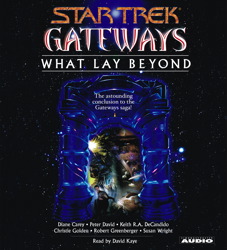 Gateways Book Seven: What Lay Beyond

Created by the incalculably ancient Iconians, whose transcendent technology is quantum levels beyond that of the Federation and its allies, the Gateways offer instantaneous transport across unimaginable distances. Throughout the known galaxy the sudden reactivation of the Gateways has destabilized interstellar relations between planets and cultures previously separated by countless light-years. Starfleet's finest have coped with the crisis as best they can, but circumstances have forced several valiant commanders to leap through separate Gateways into the unknown.

Captain Jean-Luc Picard of Star Trek: The Next Generation®

All of these heroes have taken the ultimate gamble: hurling themselves through a Gateway without any knowledge of what lay beyond. Each faces a personally unique challenge, struggling to find a way back to the ships and homes they left behind.

And waiting behind at least one of the Gateways are the ageless Iconians, the primordial architects of the mysterious portals causing chaos throughout the Milky Way galaxy. Where did they disappear to, many long eons ago, and what do they want now? The answer lies on the other side...

Gateways Book Seven: What Lay Beyond

This title is due for release on November 1, 2001
We'll send you an email as soon as it is available!