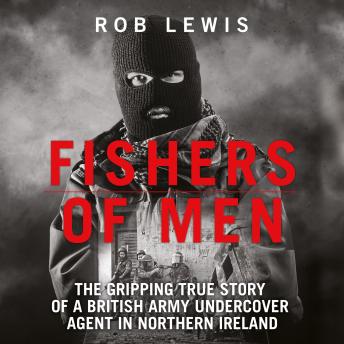 Fishers of Men is the true account of secret operations in Northern Ireland carried out by the British Army's most clandestine unit. It tells the unique story, through Rob Lewis's own extraordinary experiences, of an essential instrument in the fight against terrorism, that of covert intelligence gathering. The men and women who work in this field are a special breed who undertake hazardous risks with unflinching tenacity and professionalism - the price of negligence is high, and the need for secrecy must be preserved even at the expense of personal relationships.

The sheer determination and single-mindedness required to achieve selection to this secret world is graphically described, as well as how, against seemingly impossible odds, the operators of the FRU managed to persuade terrorists and their close associates to turn informer. The methods the unit used to target, recruit and handle their contacts, how they protected their informants, and the terrifying life their agents led are all told by an agent handler, using many of his cases to illustrate the sharpness, intelligence (and sense of humour) essential to the job.

Fishers of Men fills a gap in the available information about the secret war against terrorism in Northern Ireland. It is a gap that has so far remained largely unexplored - until Rob Lewis's informative and explosive book.

This title is due for release on December 3, 2020
We'll send you an email as soon as it is available!