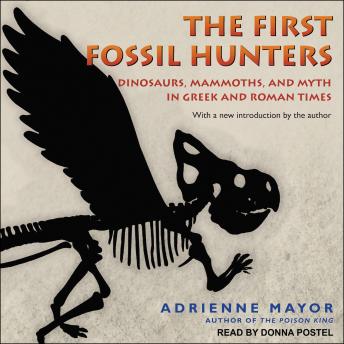 The First Fossil Hunters: Dinosaurs, Mammoths, and Myth in Greek and Roman Times

Griffins, cyclopes, monsters, and giants-these fabulous creatures of classical mythology continue to live in the modern imagination through the vivid accounts that have come down to us from the ancient Greeks and Romans. But what if these beings were more than merely fictions? Through careful research and meticulous documentation, Adrienne Mayor convincingly shows that many of the giants and monsters of myth did have a basis in fact-in the enormous bones of long-extinct species that were once abundant in the lands of the Greeks and Romans.

As Mayor shows, the Greeks and Romans were well aware that a different breed of creatures once inhabited their lands. They frequently encountered the fossilized bones of these primeval beings, and they developed sophisticated concepts to explain the fossil evidence, concepts that were expressed in mythological stories.

Like their modern counterparts, the ancient fossil hunters collected and measured impressive petrified remains and displayed them in temples and museums; they attempted to reconstruct the appearance of these prehistoric creatures and to explain their extinction. By listening to these neglected narratives for the first time in the light of modern scientific discoveries, Adrienne Mayor illuminates a lost world of ancient paleontology.