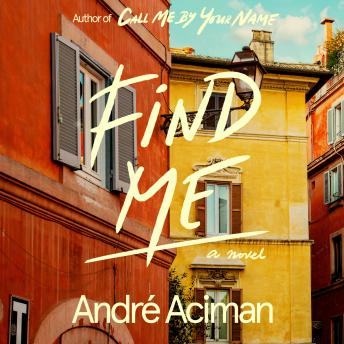 Find Me: A Novel

This program is read by Michael Stuhlbarg, the actor who played Professor Samuel Perlman in Luca Guadagnino's critically-acclaimed film, Call Me by Your Name. A bonus conversation between Michael Stuhlbarg and André Aciman is included at the end of the program.

In this spellbinding exploration of the varieties of love, the author of the worldwide bestseller Call Me by Your Name revisits its complex and beguiling characters decades after their first meeting.

No novel in recent memory has spoken more movingly to contemporary readers about the nature of love than André Aciman’s haunting Call Me by Your Name. First published in 2007, it was hailed as “a love letter, an invocation . . . an exceptionally beautiful book” (Stacey D’Erasmo, The New York Times Book Review). Nearly three quarters of a million copies have been sold, and the book became a much-loved, Academy Award–winning film starring Timothée Chalamet as the young Elio and Armie Hammer as Oliver, the graduate student with whom he falls in love.

In Find Me, Aciman shows us Elio’s father, Samuel, on a trip from Florence to Rome to visit Elio, who has become a gifted classical pianist. A chance encounter on the train with a beautiful young woman upends Sami’s plans and changes his life forever.

Elio soon moves to Paris, where he, too, has a consequential affair, while Oliver, now a New England college professor with a family, suddenly finds himself contemplating a return trip across the Atlantic.

Aciman is a master of sensibility, of the intimate details and the emotional nuances that are the substance of passion. Find Me brings us back inside the magic circle of one of our greatest contemporary romances to ask if, in fact, true love ever dies.

Just have to know

I started Find Me immediately after finishing Call Me By Your Name and was incredibly disappointed. This book feels and even sounds completely separate from the first book, which I maybe wouldn’t have minded since the characters have aged and the point of view changes throughout, but the story itself was so drawn out and boring. Way too much time is spent on Sam’s story, which ends up feeling like a throw away (in my opinion) and the dialogue throughout is so cringey, bordering on laughable, that makes it even harder to stick with it. I only finished because I forced myself to find out what happens for Elio and Oliver, after all of the emotional investing I brought with me from the first book, and even that ended up being a let down.

I listened to this book directly following a reread of “Call me by your name”. This book is a beautiful extension of the original story. We get to see the characters we connected with most in the previous book as they have lived their lives and grew into themselves over the years. I myself was heartbroken at the ending of “Call me by your name” but this story breathes life back into what is my favorite love story.

This was not my favorite read. It had some good moments; but I had trouble getting into it ....

A fascinating follow-on to “Call Me by Your Name.” The entire novel is set during various months of November—-not quite fall, not quite winter. The abstracts time and age figure prominently in the novel. Though the three plots occur the tiniest bit far-fetched, the composition is rich, in true Aciman style, especially the vivid, visual description of Rome, as in the previous work.

I did not like this book very much. Too much time was given on Elio's dad. Plus some of the dialogue was not believable.