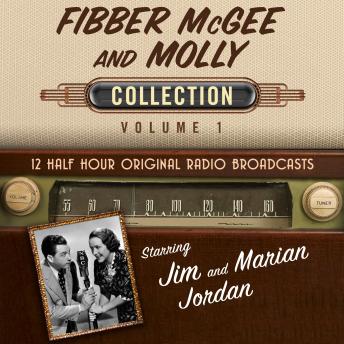 Fibber McGee & Molly had a long and successful run on radio (1935-1959). The program showcased terrific comic and musical talent, headlined by its creators and stars, married couple Jim and Marian Jordan. Living in the fictional Midwestern town of Wistful Vista, Fibber was an American teller of tall tales and a braggart, usually to the exasperation of his long-suffering wife Molly. Life in Wistful Vista followed a well-developed formula, but was always fresh. Fibber’s weekly schemes would be interrupted, inspired by, and often played upon the people of Wistful Vista, a set of regular players and characters including Mayor LaTrivia, Doc Gamble, Mrs. Uppington, Wallace Wimple, Alice Darling, Beulah, Myrt, the Old Timer and Fibber’s next-door neighbor, Throckmorton P. Gildersleeve. The program used a series of running gags that would become part of the common language, many treasures can be found in the Closet at 79 Wistful Vista. The show began as a comic reflection of Depression Era America, but as time went on and the shadows of war came over the nation, the show again caught the mood of the country. WWII was fought on the Home front at Wistful Vista as surely as anywhere else in America, but here they had the benefit of Fibber’s somewhat addled perspective.Now, enjoy 12 of their funniest radio broadcasts.10/7/47 Football Game Anniversary
10/14/47 Catching Teeny’s Cat
10/21/47 Late Car Payment
10/28/47 Big Deal at the Farm
11/4/47 McGee Gets Weighed
11/11/47 War Surplus Store
12/30/47 $10 Gift Certificate
1/6/48 Magic Act
1/13/48 Portable Radio
1/20/48 Molly’s Pickles
1/27/48 Missing Laundry
2/3/48 McGee Makes a Lamp

This title is due for release on April 23, 2019
We'll send you an email as soon as it is available!