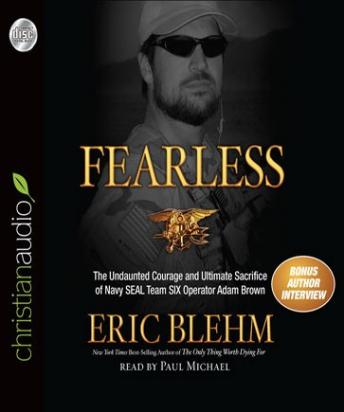 Fearless takes you deep into SEAL Team Six, straight to the heart of one of it's most legendary operators. When Navy SEAL Adam Brown woke up on March 17, 2010, he didn't know he would die that night in the Hindu Kush Mountains of Afghanistan--but he was ready. In a letter to his children, not meant to be seen unless the worst happened, 'I'm not afraid of anything that might happen to me on this Earth, because I know no matter what, nothing can take my spirit from me.But long before Adam Brown became a member of the elite SEAL Team Six--the counter terrorism unit that took down Osama bin Laden--there was a fun-loving country boy from Arkansas whose greatest goal had been to wear his high school's football jersey. An undersized daredevil, prone to jumping off roofs into trees and off bridges into lakes, Adam was a kid who broke his own bones but would never break a promise to his parents, until he grew older, and his family watched that appetite for risk draw him into a downward spiral that eventually landed him in jail.FEARLESS is the story of a man of extremes, whose determination was fueled by faith, family, and the love of a woman. It's about a man who waged a war against his own worst impulses and persevered to reach the top tier of the U.S. military. Always the first to volunteer for the most dangerous assignments, Adam's final act of bravery led to the ultimate sacrifice.FEARLESS is the intimate story of a devoted man who was an unlikely hero but a true warrior, described by all who knew him as just that--fearless.

one of the greatest books I have ever read. not because of its literary qualities, though they are good. not because it's the greatest story ever told, though it is a great one. mostly because of the introspection it created. I want my life to be worth the price that was paid by this man's discipline.

Great book I found myself sitting in my car at home listening to it! What a great story about overcoming the odds!

I never read books but felt the need to read this one and wow it’s amazing! Great audio book as well for that next long road trip.

This is a very good book. I would recommend it

Great read, very inspiring story, as someone who participated in war, I really appreciate the honesty of the writer. Definitely recommend it!

Awe Inspiring story about a true hero. I laughed, cried, became angered, and found joy in learning about Adam Lee Brown's life. As a Naval veteran, I would have considered it an honor to have known a man of his caliber not only as a warrior but as a husband, dad, brother, son, co-worker, and friend. A must read! I'd love to see this story on the big screen someday.

It is rare to meet a real life hero who takes action to not only care about his country, and fellow Americans, but also the innocent ones caught in the battle. Adam's appeal for an outpouring of compassion from home for these war torn children is humbling. He shows us a picture of someone who understands compassion for his fellow man around the world. Read this book to be deeply inspired and appreciate the freedoms we often take for granted.

What a tremendous story of Adam Brown, Navy Seal and member of the elite Seal Team Six. His life story, his commitment to Jesus Christ and love for his country, his family and his fellow Seal Team members is truly inspirational!!! He is a hero who literally laid his life down for his friends. You will not regret for one second reading this book if you love our country and the men and women in uniform that put their lives on the line to protect us and our freedoms.

Very good book,well read and an Awsome real life story of a true Hero.Would recommend listening to it.

Easily one of the best books I've ever read. Not necessarily because of any one single reason; but because the man, the family, the girl, the job, the kids, the demons, the writing, and the reason.

This title is due for release on May 22, 2012
We'll send you an email as soon as it is available!