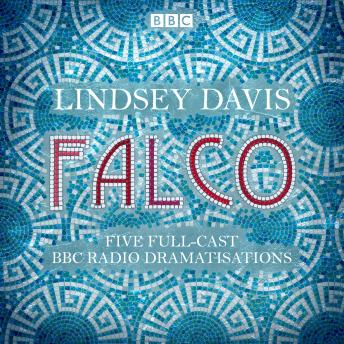 The Silver Pigs:
One fine day, A.D. 70, Sosia Camillina quite literally runs into Marcus Didius Falco on the steps of the Forum. It seems Sosia is on the run from a couple of street toughs, and after a quick and dirty rescue, P.I. Falco wants to know why. Hoping for future favors from Sosia's powerful uncle, Falco embarks on an intricate case of smuggling, murder, and treason that reaches into the palace itself.

Shadows in Bronze:
Rome, AD 71. Against his better judgement, Marcus Didius Falco secretly disposes of a decayed corpse for the Emperor Vespasian, then heads for the beautiful Bay of Naples with his friend Petronius. But this will be no holiday: they have been sent to investigate the murderous members of a failed coup, now sunning themselves in luxurious villas and on fancy yachts in Neapolis, Capreae, and Pompeii.

Venus in Copper:
A small accounting error has left Marcus Didius Falco sharing a cell with a large rat. But the Roman Empire's most hard-done-by investigator is finally bailed out, and promptly accepts a commission to help a family of freed slaves fend off a professional bribe....

The Iron Hand of Mars:
Falco is dispatched to one of the most hostile parts of the Empire to deliver a new standard, an iron hand, to one of the legions. Germania is cold, wet, dismal, and full of dark forests inhabited by bloodthirsty barbarians, but Falco has an even bigger problem to worry about: he has forgotten Helena Justina's birthday, and she is being pursued by the Emperor's son Titus Caesar.

Poseidon’s Gold:
Returning to Rome after his mission to Germania, Falco finds that his mother is being harassed by a centurion named Censorinus, who says he is chasing a debt owed to him by Falco's late brother Festus. When Falco refuses to cough up the money, he and Censorinus end up fighting... and later, the centurion turns up dead. Under suspicion of murder, Falco must confront his past and uncover his brother's secrets before he can clear his name and solve the mystery.

These funny and fast-moving adaptations are a treat for all Falco fans.

Sound quality varies due to the age of these recordings.

This title is due for release on September 27, 2018
We'll send you an email as soon as it is available!