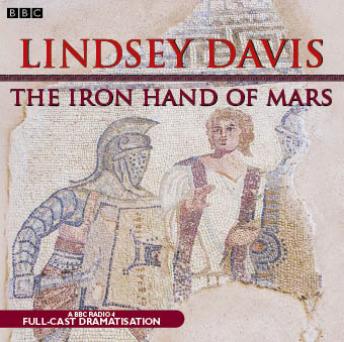 The Falco Iron Hand Of Mars

Anton Lesser and Anna Madeley star in this BBC Radio 4 full-cast dramatisation of the fourth novel in Lindsey Davis's bestselling series featuring Roman private eye Falco. The Iron Hand of Mars sees Falco being dispatched to one of the most hostile parts of the Empire to deliver a new standard - an iron hand - to one of the legions. Germania is cold, wet, dismal and full of dark forests inhabited by bloodthirsty barbarians, but Falco has an even bigger problem to worry about: he has forgotten Helena Justina's birthday, and she is being pursued by the Emperor's son Titus Caesar. As Falco makes his way through dangerous territory, he encounters the aftermath of a grisly crime, investigates the case of a missing legate, gets into trouble with a centurion and has a fateful encounter with a Celtic priestess and a giant bull. With the help of his travelling companions - Helena's tribune brother Justinus, redundant barber Xanthus and Helveticus - Falco must try to complete his most deadly mission yet... 'The Iron Hand of Mars' follows on from BBC Radio 4's hugely successful dramatisations of 'The Silver Pigs', 'Shadows in Bronze' and 'Venus in Copper'. Anna Madeley returns as Helena Justina, along with Ben Crowe as Falco's best friend Petronius, Jonathan Keeble as Titus Caesar and Michael Tudor Barnes as Vespasian.

This title is due for release on November 5, 2007
We'll send you an email as soon as it is available!