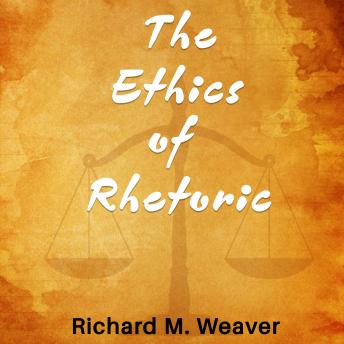 The Ethics of Rhetoric

﻿In The Ethics of Rhetoric, Richard M. Weaver evaluates the ethical and cultural role of rhetoric and its reflection on society. Weaver draws upon classical notions of rhetoric in Plato's Phaedrus, and he examines the effectiveness and implications of the manipulation of language in the works of Lincoln, Burke, and Milton. In this collection of essays, Weaver examines how different types of rhetoric persuade, their varying levels of effectiveness and credibility, and how one's manner of argumentation and style of persuasion are indicative of character. Ultimately, Weaver argues that the cultivation of pure language creates pure people. Initially published in 1953, The Ethics of Rhetoric remains timeless in its evaluation of rhetoric's role in society.

This title is due for release on July 9, 2022
We'll send you an email as soon as it is available!