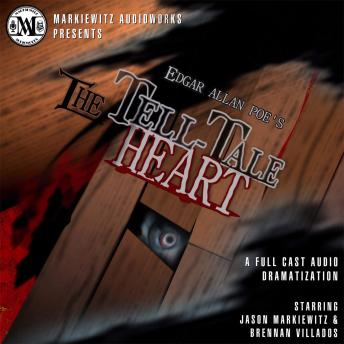 Markiewitz Audioworks Presents Edgar Allan Poe's 'The Tell-Tale Heart.' This production is a full audio dramatization (with incredible original music and magnificent sound effects) of one of the most popular horror stories of the past 200 years. In this story, a man (Edward) is afforded a place to stay in exchange for doing chores around the house. However, his landlord (Mr. Graves), a friendly and gracious old man, has one characteristic which drives Edward to the brink of madness; a pale blue eye. Eventually, Edward decides that he can't take the eye any longer, and despite his generally cordial relationship with Mr. Graves, is determined to kill him, thus ridding himself of the eye forever. Come with us as we descend into madness with this original adaptation of Edgar Allan Poe's: The Tell-Tale Heart.
Cast:
Jason Markiewitz as Edward Valentine, Officer Kent, Officer Wallace
Brennan Villados as Mr. Graves, Sgt O'Toole
Lia Rose as Homeless Woman in the Barn
Music by: Hayden Folker
Cover Art by: Jon Markiewitz
Script by: Jason Markiewitz
Directed by: Jason Markiewitz

This title is due for release on September 2, 2022
We'll send you an email as soon as it is available!