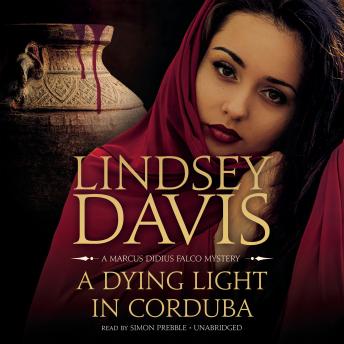 A Dying Light in Corduba: A Marcus Didius Falco Mystery

#8 of The Marcus Didius Falco Mysteries

In this eighth mystery featuring hard-boiled Roman PI Marcus Didius Falco, Davis creates a chiaroscuro world of evil plots and dark humor, as olive oil whets a villain’s appetite for power and his taste for murder.

Surprisingly, nobody is poisoned at the Society of Olive Oil Producers banquet—the attempted murder of Rome’s chief spy occurs immediately afterward. Suspicion falls, quick as the Italian night, on the dinner’s sinuous dancer, a lady who has already left for Corduba, Spain. Naturally, Marcus Didius Falco, the Philip Marlowe of Roman detectives, is dispatched to follow her. But he has pledged to stay with Helena, his pregnant, patrician wife, until she gives birth. Caught between Scylla and Charybdis, Falco makes what may be a fatal mistake: he brings Helena with him to a terra incognita of olives and intrigue, where a dies irae and a remorseless killer wait.