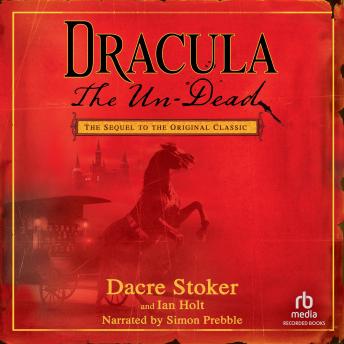 The great-grandnephew of Bram Stoker, Dacre Stoker collaborates with Dracula historian Ian Holt to pen the first Stoker-family-supported sequel to the 1897 horror classic. Based on Bram Stoker's notes, the legendary story continues 25 years after the events of the original. An evil has once again crept onto the land, this time to hunt down those responsible for Dracula's demise.A quarter of a century after Count Dracula 'crumbled into dust,' Quincey Harker-the son of Jonathan and Mina Harker-leaves law school to pursue a career on stage, only to stumble upon the troubled production of Dracula, directed and produced by Bram Stoker himself. As the play plunges Quincey into the world of his parents' terrible secrets, death begins to stalk the original band of heroes that defeated Dracula a quarter-century ago. Could it be that the count survived and is now seeking revenge? Or is there another, far more sinister force at work whose relentless purpose is to destroy anything and anyone associated with Dracula, the most notorious vampire of all time?

This title is due for release on October 13, 2009
We'll send you an email as soon as it is available!