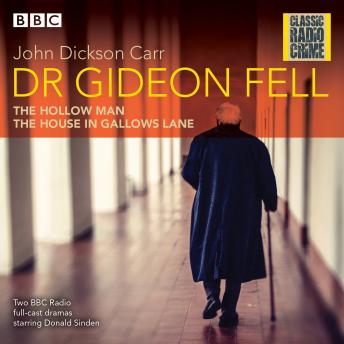 One of the pre-eminent detectives of crime fiction’s Golden Age, Dr Gideon Fell is stout, jovial and fond of beer and band music. However, he also possesses a razor-sharp mind and extraordinary powers of deduction, which are frequently put to the test as he is called upon to solve seemingly impossible crimes. Created by the master of the locked-room mystery, John Dickson Carr, Dr Fell appeared in 23 novels, several short stories and plays, and numerous radio adaptations. These two dramas, first broadcast on BBC Radio 4 in 1997, see him embroiled in two inexplicable cases that have the police baffled.

In The Hollow Man, two murders are committed by someone who appears to be both invisible and lighter than air; while in The House in Gallows Lane, the peaceful English countryside of 1936 is disrupted by an alarming fortune-teller – and a mysterious death. These thrilling dramatisations star Donald Sinden as Gideon Fell with John Hartley as Hadley.

This title is due for release on September 7, 2017
We'll send you an email as soon as it is available!