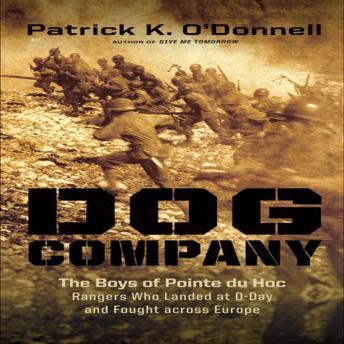 Dog Company: The Boys of Pointe du Hoc—the Rangers Who Accomplished D-Day’s Toughest Mission and Led the Way across Europe

An epic World War II story of valor, sacrifice, and the Rangers who led the way to victory in Europe

It is said that the right man in the right place at the right time can make the difference between victory and defeat. This is the dramatic story of sixty-eight soldiers of the US Army's Second Ranger Battalion, D Company—Dog Company—who made that difference, time and again.

From D-day, when German guns atop Pointe du Hoc threatened the Allied landings and the men of Dog Company scaled the ninety-foot cliffs to destroy them; to the thickly forested slopes of Hill 400, in Germany's Hürtgen Forest, where the Rangers launched a desperate bayonet charge across an open field, captured the crucial hill, and held it against all odds. In each battle, the men of Dog Company made the difference.

Dog Company is their unforgettable story—thoroughly researched and vividly told by acclaimed combat historian Patrick K. O'Donnell—a story of extraordinary bravery, courage, and determination. America had many heroes in World War II, but few can say that, but for them, the course of the war may have been very different. The right men, in the right place, at the right time—Dog Company.

This title is due for release on November 6, 2012
We'll send you an email as soon as it is available!