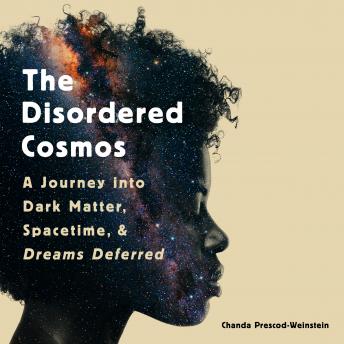 The Disordered Cosmos: A Journey into Dark Matter, Spacetime, and Dreams Deferred

From a star theoretical physicist, a journey into the world of particle physics and the cosmos—and a call for a more liberatory practice of science.

In The Disordered Cosmos, Dr. Chanda Prescod-Weinstein shares her love for physics, from the Standard Model of Particle Physics and what lies beyond it, to the physics of melanin in skin, to the latest theories of dark matter—along with a perspective informed by history, politics, and the wisdom of Star Trek.

One of the leading physicists of her generation, Dr. Chanda Prescod-Weinstein is also one of fewer than one hundred Black American women to earn a PhD from a department of physics. Her vision of the cosmos is vibrant, buoyantly nontraditional, and grounded in Black and queer feminist lineages.

Dr. Prescod-Weinstein urges us to recognize how science, like most fields, is rife with racism, misogyny, and other forms of oppression. She lays out a bold new approach to science and society, beginning with the belief that we all have a fundamental right to know and love the night sky. The Disordered Cosmos dreams into existence a world that allows everyone to experience and understand the wonders of the universe.

This is simultaneously a book about about physics and in particular dark matter, and an account of what it\'s like to be a black American woman of Caribbean extraction in the world of science, and in particular in physics.\r\n\r\nPrescod-Weinstein loves physics, and started loving physics as a child, looking up at the night sky. Later in the book, she notes that her childhood in Los Angeles gave her no idea what she was missing until later in life, when she was a working theoretical cosmologist and astrophysicist. When, in the course of the book, she\'s talking about physics, she\'s often expressing joy and excitement.\r\n\r\nWhen she\'s talking about being a black American woman of Caribbean extraction working in physics, not so much.\r\n\r\nPrescod-Weinstein is only the 63rd black woman to earn a Ph.D. in physics in the United States. The more challenging parts of this book to read or listen to, but also very educational, are the parts where she\'s talking about the reality of being a black woman in science and especially in physics.\r\n\r\nHer mother worked long hours and scrimped, saved, and did without, to send her to an elite high school where she could get the academic background and the connections to get into a distinguished college to begin her serious pursuit of a career in physics. She got a BA in Physics and Astronomy at Harvard in 2003, a master\'s degree in astronomy at the University of California, Santa Cruz in 2005, and after a change in research direction, her Ph.D. from the University of Waterloo in 2010.\r\n\r\nAnd all along the way, she encountered obstacles that her white, and especially white male, fellow students and colleagues did not. Being assumed to be there for diversity. Being questioned on her basic competence far more. Having her ideas often dismissed, and then the same idea being accepted readily when in it came from a white man.\r\n\r\nBeing raped. She isn\'t graphic in describing it, and does not name the man, but that trauma put a large obstacle in being able to continue her studies and her work. She had to overcome that to continue, but the trauma isn\'t gone.\r\n\r\nAmong the more \"routine\" challenges is the fact that women in academic departments tend to be stuck with the \"emotional labor\" of making things work, and as the only black woman, often the only black person in any group, she\'s always the designated person for any minority woman to seek out, or to be referred to, when they have questions and problems that white faculty and project leaders can\'t address. She values that work, and believes in its vital importance, but it also takes time, energy, and intellectual bandwidth she could be more directly devoting to science.\r\n\r\nIt\'s an interesting book, sometimes difficult, but well worth reading or listening to.\r\n\r\nRecommended.

This title is due for release on March 9, 2021
We'll send you an email as soon as it is available!