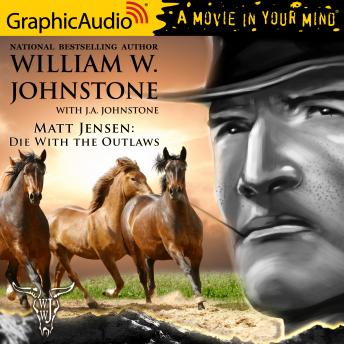 Die With the Outlaws [Dramatized Adaptation]

'On the lawless frontiers of the American West, there is one rule every outlaw should remember: Never cross a mountain man like Matt Jensen. Not if you want to keep breathing. No gun. No horse. No water or food. And worse yet: No idea how he ended up in the middle of a desert with a bullet in his leg and a bump on his head. That's the sorry situation Matt Jensen wakes up to-dazed and confused-until he slowly pieces together what happened. The last thing he remembers: He agreed to help out a friend of Duff MacCallister's. A pretty lady and her husband at a horse ranch. He also recalls their cross-country trip through hell to deliver the horses safely to market. That's when the outlaws showed up. That's when the shooting began. That's when everything went dark. But now Matt Jensen is alive and well and living for revenge. No time to lose. No holding back. And before it's all over, no trigger-happy horse thief left standing. Performed by Nanette Savard, Thomas Penny, Eric Messner, Lydia Kraniotis, James Konicek, Michael John Casey, Christopher Walker, Richard Rohan, Steven Carpenter, Zeke Alton, David Coyne, Christopher Graybill, Todd Scofield, James Lewis, Bill Gillett, Lise Bruneau, Scott McCormick, Alejandro Ruiz, Joel David Santner, Steve Wannall, Terence Aselford, Chris Genebach, Ken Jackson, Matthew Bassett, Bradley Smith, Henry Kramer, Audrey Bertaux, Scott Bruffey, David Jourdan, Laura C. Harris, Joe Mallon, Lolita Horne, Kenyatta Rogers, Rose Elizabeth Supan, Mort Shelby, Chris Stinson, Colleen Delany, Andrew Quilpa and Marni Penning.'

Die With the Outlaws [Dramatized Adaptation]

This title is due for release on October 1, 2020
We'll send you an email as soon as it is available!