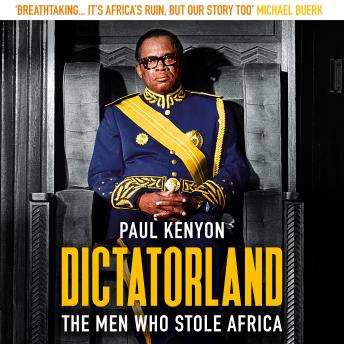 A vivid, heartbreaking portrait of the fate that so many African countries suffered after independence.
The dictator who grew so rich on his country's cocoa crop that he built a 35-storey-high basilica in the jungles of the Ivory Coast. The austere, incorruptible leader who has shut Eritrea off from the world in a permanent state of war and conscripted every adult into the armed forces. In Equatorial Guinea, the paranoid despot who thought Hitler was the saviour of Africa and waged a relentless campaign of terror against his own people. The Libyan army officer who authored a new work of political philosophy, The Green Book, and lived in a tent with a harem of female soldiers, running his country like a mafia family business. And behind these almost incredible stories of fantastic violence and excess lie the dark secrets of Western greed and complicity, the insatiable taste for chocolate, oil, diamonds and gold that has encouraged dictators to rule with an iron hand, siphoning off their share of the action into mansions in Paris and banks in Zurich and keeping their people in dire poverty.
“A breathtaking account ... Paul Kenyon is a brilliant writer who's been there and tells a story of unparalleled greed and western complicity in vivid detail” MICHaeL BUERK

“Highly readable ... A chapter on the rise of FElix HouphouEt-Boigny is especially vivid” THE TIMES

“Well written and sensibly structured ... Some of the most revealing passages are based on interviews with retired expatriate executives and diplomats who were witness to the excesses of the early post-colonial years” THE SUNDAY TIMES

“Kenyon's stories of corruption and excess are truly compelling, while his analysis of the West's motivations is astute and illuminating” CULTURE TRIP

“A jaw-dropping tale of greed, corruption and brutality” DAILY EXPRESS

“A heart-breaking and stomach-churning history but also an utterly absorbing one ... Kenyon blends in gripping, authenticating first-hand testimonies from those who were behind the carnage and corruption ... This book shines a vital light on how Africa was robbed ‘in broad daylight'” --Uae NATIONAL

“A humane, timely, accessible and well-researched book that shines a light on urgent African issues [...] that, when we consider the state of our own societies, can no longer be dismissed as merely somewhere else's problem” IRISH TIMES

Very good indeed, though a book on the topic can hardly be all-encompassing, while the title suggests differently. It lacks Western-prone rulers like Deby, dos Santos and Biya or such infamous figures as Bokassa and Idi Amin. Also, there's not much on the more or less socialist regimes of Africa, Libya aside. Yet the book only profits from the focus on the case studies given.

This title is due for release on May 7, 2020
We'll send you an email as soon as it is available!