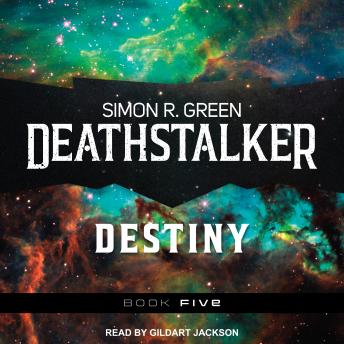 Owen Deathstalker has a prophecy to fulfill. Just as the espers foretold, Owen tumbled an empire and witnessed the end of everything he believed in . . . all that's left to do is die. But Owen has a few more scores he'd like to settle before his borrowed time is up.

The Empire is besieged by nanotechnology plagues and AI invasions, while mysterious and horrific beings, known as 'the Recreated,' descend from the Darkvoid. But right now, Owen's only concern is rescuing Hazel d'Ark from the vicious Blood Runners who abducted her.

He's already lost so much to become the leader and warrior he never wanted to be; he'll be damned if he loses Hazel too. So one more time, Owen Deathstalker will step up and be the hero-for Hazel, and then for Humanity. One more time, he'll call upon the gifts of the Deathstalker Clan to fulfill his destiny and face death. All while knowing that every 'one more time' could be his last.

This title is due for release on January 3, 2019
We'll send you an email as soon as it is available!