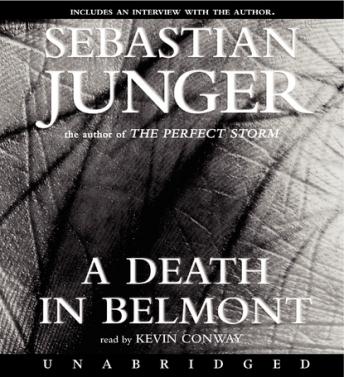 A Death in Belmont

In the spring of 1963, the quiet suburb of Belmont, Massachusetts, is rocked by a shocking murder that fits the pattern of the infamous Boston Strangler, still at large. Hoping for a break in the case, the police arrest Roy Smith, a Black ex-con whom the victim hired to clean her house. Smith is hastily convicted of the murder, but the Strangler's terror continues. And through it all, one man escapes the scrutiny of the police: a carpenter working at the time at the Belmont home of young Sebastian Junger and his parents—a man named Albert.

A tale of race and justice, murder and memory, this powerful true story is sure to rank besides such classics as Helter Skelter, and The Executioner’s Song.

I enjoy true crime in general, I think it is the personal connection to the events that make this book special.

Like all Dick Francis books, a really good story but the ending left the listener feeling as if Mr. Francis got bored or stumped and just said to himself "the heck with it." Insufficient character chemistry. The reader was terrific.

I guess I didn't realize when I selected this book that it was a work of non-fiction. It was very well done and obviously very well researched. I enjoyed it thoroughly.

I lived in Winthrop (near Chelsea) nearly contemporaneously with DeSalvo. The author has managed to capture both the ethnic diversity and hatreds of the time and place extremely preceptively. Those who fondly believe that Massachusetts was and is the bastion of liberal thought would do well to read to read this book. Junger's skill at research and story telling shines as always.

I enjoyed this book. The author keeps on going back and forth on the guilty and innocent question. If you like true stories I think you will enjoy.

I found it very hard to get into this book and actually sent it back without finishing.

Mr Junger you've done another great job. Well reseached, well written, and an remarkable placement as well. Would recommend to anyone curious about this most disgusting of topics.

I selected this story because I'm from the area. It all happened well before I was born, but it was still fascinating to hear the story. I wish for the victims' sake there were clear answers as to who the Boston Strangler really is and who killed that elderly woman. Narrator did a good job. Easy to listen to.

This title is due for release on May 9, 2006
We'll send you an email as soon as it is available!