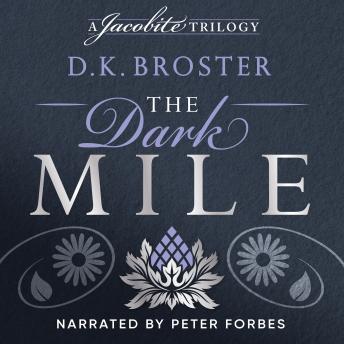 The Dark Mile: The final book in the Flight of the Heron trilogy

The Dark Mile - the final instalment of D.K. Broster's Jacobite trilogy - a sequel to The Flight of the Heron and The Gleam in the North.

Two years have passed since the tragic events of The Gleam in the North and Ewen Cameron's wife Alison is awaiting the birth of their third child in Ardroy while Ewen visits his cousin Ian Stewart at his great Uncle Alexander's home at Ivernacree.
Ian is now heir to the estate, having lost his older brother Alan at Culloden, where they were betrayed by their archenemy, Campbell of Cairns.
Ian is under pressure from his father to marry and secure an heir. But he can't forget the old prophecy from a spae-woman about how he will fall in love with "a woman who is not what she seemed".
Fate intervenes when Ian comes to the rescue of an elderly man and his beautiful daughter, Olivia, who has been injured in a coaching accident. Ian offers them a warm welcome at his home while Olivia recuperates.
Captivated by the girl, Ian is distraught when he discovers her true identity: Beautiful, charming Olivia is a Campbell, daughter of the despised traitor, Campbell of Cairns - which means she can never be his.
Back at Ardroy, Ewen has problems of his own as the mendacious Finlay MacPhair is back in the Highlands and intent on wreaking revenge and making mischief for Ewen in return for more English gold.
The Dark Mile is a gripping, romantic tale of star-crossed lovers, deceit, treachery, vengeance and - ultimately - redemption.
It brings the thrilling tales from The Flight of the Heron and The Gleam in the North to a satisfying and gripping conclusion.
With action, historical adventure and lyrical descriptions of the Scottish Highlands, The Dark Mile, the final book in the trilogy is sure to appeal to fans of Diana Gabaldon's Outlander series and Peter May's Lewis trilogy.

Dark Mile: The final book in the Flight of the Heron trilogy