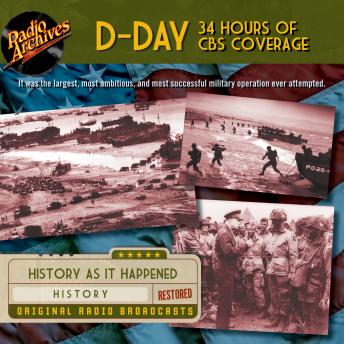 It was the largest, most ambitious, and most successful military operation ever attempted -- and radio was there to cover it. D-Day, the invasion of Normandy. It was the turning point of the war in Europe, the beginning of the end for the Axis as the Allies started their drive towards Germany. It was a momentous event that would change not only the course of World War II, but the history of the world. Radio Archives is pleased and proud to offer the complete and continuous NBC network coverage of the events of June 6 and 7, 1944. These are recordings that many historians believe to be among the most valuable audio documents ever preserved. The NBC broadcasts -- containing over 38 hours of continuous programming of news, music, drama, comedy, and entertainment - are history as it happened. This collection is sure to occupy a special place in your radio collection.