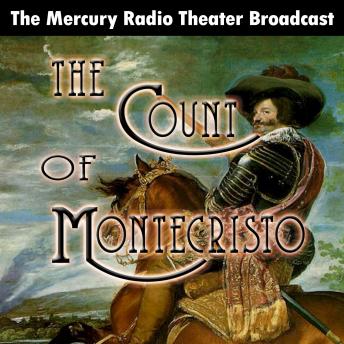 Starring Orson Welles, Anges Moorehead, and Ray Collins, The Count of Monte Cristo is a tale of revenge and retribution. Edmond Dantès, a young, energetic sailor, is falsely accused of treason on his wedding day and incarcerated in the forbidding Château d'If. His escape and ultimate revenge on those who wronged him makes this one of the most thrilling stories in French literature, as compelling now as when it was first published in 1846. The Mercury Theatre on the Air, a show featuring the acclaimed New York drama company founded by Orson Welles and John Houseman. In its brief run, it featured an impressive array of talents, including Agnes Moorehead, Bernard Herrmann, and George Coulouris. The show is famous for its notorious War of the Worlds broadcast, but the other shows in the series are relatively unknown.The show first broadcast on CBS and CBC in July 1938. It ran without a sponsor until December of that year, when it was picked up by Campbell’s Soup and renamed The Campbell Playhouse

This title is due for release on July 16, 2012
We'll send you an email as soon as it is available!