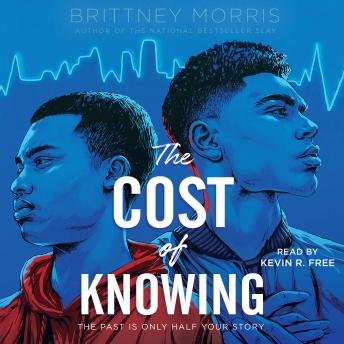 The Cost of Knowing

SELECTED AS A YALSA 2022 AMAZING AUDIO FOR YOUNG ADULTS!

Dear Martin meets They Both Die at the End in this gripping, evocative novel about a Black teen who has the power to see into the future, whose life turns upside down when he foresees his younger brother’s imminent death, from the acclaimed author of SLAY.

Sixteen-year-old Alex Rufus is trying his best. He tries to be the best employee he can be at the local ice cream shop; the best boyfriend he can be to his amazing girlfriend, Talia; the best protector he can be over his little brother, Isaiah. But as much as Alex tries, he often comes up short.

It’s hard to for him to be present when every time he touches an object or person, Alex sees into its future. When he touches a scoop, he has a vision of him using it to scoop ice cream. When he touches his car, he sees it years from now, totaled and underwater. When he touches Talia, he sees them at the precipice of breaking up, and that terrifies him. Alex feels these visions are a curse, distracting him, making him anxious and unable to live an ordinary life.

And when Alex touches a photo that gives him a vision of his brother’s imminent death, everything changes.

With Alex now in a race against time, death, and circumstances, he and Isaiah must grapple with their past, their future, and what it means to be a young Black man in America in the present.