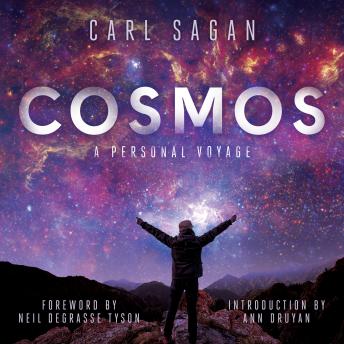 RETURNING TO TELEVISION AS AN ALL-NEW MINISERIES ON FOX

Cosmos is one of the bestselling science books of all time. In clear-eyed prose, Sagan reveals a jewel-like blue world inhabited by a life form that is just beginning to discover its own identity and to venture into the vast ocean of space. Cosmos retraces the fourteen billion years of cosmic evolution that have transformed matter into consciousness, exploring such topics as the origin of life, the human brain, Egyptian hieroglyphics, spacecraft missions, the death of the Sun, the evolution of galaxies, and the forces and individuals who helped to shape modern science.

Includes introductory music: 'Heaven and Hell' by Vangelis from Cosmos: A Personal Voyage used with permission from Druyan-Sagan Associates, Inc. All rights reserved.

“Magnificent . . . With a lyrical literary style, and a range that touches almost all aspects of human knowledge, Cosmos often seems too good to be true.”—The Plain Dealer

“Sagan is an astronomer with one eye on the stars, another on history, and a third—his mind’s—on the human condition.”—Newsday

“Brilliant in its scope and provocative in its suggestions . . . shimmers with a sense of wonder.”—The Miami Herald

“Sagan dazzles the mind with the miracle of our survival, framed by the stately galaxies of space.”—Cosmopolitan

I enjoyed reading this book, and the narration was very good. A must read for anyone curious about the universe and our place in it.

This is the first Audiobook I've ever listened where the narration was so full of over the top intonation changes that it was hard to concentrate on the book's actual content. It's probably to convey excitement for the book and cosmos, but it just feels forced after a while and it's not making the book easy to grasp. I love LeVar Burton, Neil DeGrasse Tyson and Seth MacFarlane but I think their way of speaking is not suited for this format.

This amazing book should be part of mandatory reading, if not in middle school then high school for sure! Inspirational, moving, scientific, unbiased ( if there is such product of human thinking).

I like science, space and the associated history, so this book was perfect for me. Even though written a while ago, most of the stories told are timeless. if you like the tv show Cosmos, you should enjoy this book.

A great way to learn about where we live, so much information packed into a great read! The author presented some dry, scientific facts about astronomy and physics in a delightful way that made it quite interesting. Not enough detail to understand the math, but plenty to get get the idea of how the universe works. The narration is light and fun, not the preachy, dry, boring scientific prose you'd normally expect from an astronomer.

This title is due for release on May 30, 2017
We'll send you an email as soon as it is available!