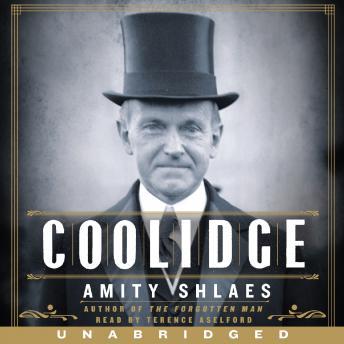 Amity Shlaes, author of The Forgotten Man, delivers a brilliant and provocative reexamination of America’s thirtieth president, Calvin Coolidge, and the decade of unparalleled growth that the nation enjoyed under his leadership. In this riveting biography, Shlaes traces Coolidge’s improbable rise from a tiny town in New England to a youth so unpopular he was shut out of college fraternities at Amherst College up through Massachusetts politics. After a divisive period of government excess and corruption, Coolidge restored national trust in Washington and achieved what few other peacetime presidents have: He left office with a federal budget smaller than the one he inherited. A man of calm discipline, he lived by example, renting half of a two-family house for his entire political career rather than compromise his political work by taking on debt. Renowned as a throwback, Coolidge was in fact strikingly modern—an advocate of women’s suffrage and a radio pioneer. At once a revision of man and economics, Coolidge gestures to the country we once were and reminds us of qualities we had forgotten and can use today.

If the back story is important this book is for you. He becomes president only in the last portion of the book and very little is written about his second term and the important transition to Hoover. Too much detail about the bickering with other individuals from that time that took away from an overall excellent narration and the larger picture of his achievements which were many.

History I'd never knew/thought about. Very educational and I found relevant to today's political world. To bad our national leaders, on all sides of the political spectrum are ignorant of this history.

This title is due for release on February 12, 2013
We'll send you an email as soon as it is available!