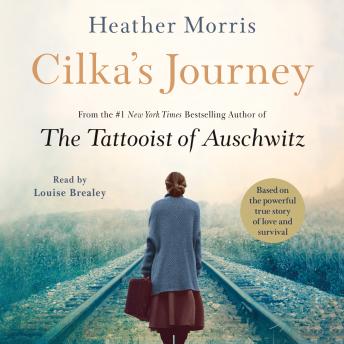 This program includes a bonus conversation with the author.

From the author of the multi-million copy bestseller The Tattooist of Auschwitz comes a new novel based on an incredible true story of love and resilience.

Her beauty saved her — and condemned her.

Cilka is just sixteen years old when she is taken to Auschwitz-Birkenau Concentration Camp in 1942, where the commandant immediately notices how beautiful she is. Forcibly separated from the other women prisoners, Cilka learns quickly that power, even unwillingly taken, equals survival.

When the war is over and the camp is liberated, freedom is not granted to Cilka: She is charged as a collaborator for sleeping with the enemy and sent to a Siberian prison camp. But did she really have a choice? And where do the lines of morality lie for Cilka, who was send to Auschwitz when she was still a child?

In Siberia, Cilka faces challenges both new and horribly familiar, including the unwanted attention of the guards. But when she meets a kind female doctor, Cilka is taken under her wing and begins to tend to the ill in the camp, struggling to care for them under brutal conditions.

Confronting death and terror daily, Cilka discovers a strength she never knew she had. And when she begins to tentatively form bonds and relationships in this harsh, new reality, Cilka finds that despite everything that has happened to her, there is room in her heart for love.

From child to woman, from woman to healer, Cilka's journey illuminates the resilience of the human spirit—and the will we have to survive.

I read (listened to) the author's previous book "The Tattooist of Auschwitz" and loved that. This book is just as good as the first. The author and narrator did an excellent job of bringing her story to life!

Loved this book and the narrator. It was my first book and audiobooks has changed my commute love listening to it while I’m on the go!

Oh my goodness what a great book. I love WW2 historical fiction and this book just reemphasized it ever more. I read the tattooist of Auschwitz in another club so completed the series.

It was great to hear Cilka’s story after reading the Tattooist of Auschwitz. What she endured in her life was remarkable. Well written and well read.

Tragic story of a girl who did what it took to survive only to be jailed for her actions when Auschwitz was liberated by the Russians. This book is a stirring reminder of the atrocities committed against the Jews and political prisoners of the Germans. We must never forget and never allow it to happen again!

I loved this book! I was hungry for more after reading The Tattooist of Auschwitz and this book delivered. It was absolutely heartbreaking and inspiring.

Phenomenal!!! I actually fell more in love with this than the prequel Tattooist of Auchwitz. Heart-breaking, engrossing, heroing tale of resilience in the darkest of times and circumstances.

Highly recommend. The story was compelling and the narrator mDebit even more believable.

So far it has kept my attention. Excellent read!

I adored this book. What a heroic story.