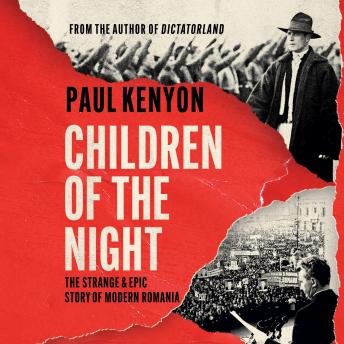 A vivid, brilliant, darkly humorous and horrifying history of some of the strangest dictators that Europe has ever seen.
'A witty and page-turning narrative full of grotesque characters' Misha Glenny

'Kenyon relates all this with verve [and] humour ... He patiently untangles the complicated webs of loyalty and enmity' Literary Review

Balanced precariously on the shifting fault line between East and West, Romania's schizophrenic, often violent past is one of the great untold stories of modern Europe.

The country that gave us Vlad Dracula, and whose citizens consider themselves descendants of ancient Rome, has traditionally preferred the status of enigmatic outsider. But this beautiful and unexplored land has experienced some of the most disastrous leaderships of the last century.

After a relatively benign period led by a dutiful King and his vivacious British-born Queen, the country oscillated wildly. Its interwar rulers form a gallery of bizarre characters and extreme movements: the corrupt and mentally unbalanced King Carol; the fascist death cult led by Corneliu Codreanu; the vain General Ion Antonescu, who seized power in 1940 and led the country into a catastrophic alliance with Nazi Germany. After 1945 power was handed to Romania's tiny communist party, under which it experienced severe repression, purges and collectivisation.

Then in 1965, Nicolae Ceau?escu came to power. And thus began the strangest dictatorship of all.

This title is due for release on January 14, 2022
We'll send you an email as soon as it is available!