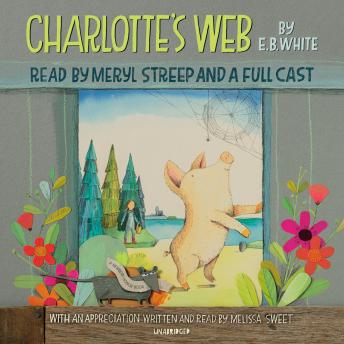 Brought to life by Meryl Streep and a full cast, this beloved book by E. B. White, author of Stuart Little and The Trumpet of the Swan, is a classic of children's literature that is 'just about perfect.'*

Some Pig. Humble. Radiant. These are the words in Charlotte's Web, high up in Zuckerman's barn. Charlotte's spider web tells of her feelings for a little pig named Wilbur, who simply wants a friend. They also express the love of a girl named Fern, who saved Wilbur's life when he was born the runt of his litter.

E. B. White's Newbery Honor Book is a tender novel of friendship, love, life, and death that will continue to be enjoyed by generations to come.

Includes an appreciation written and read by Caldecott Honor winner Melissa Sweet, the cover artist of this edition and author/illustrator of Some Writer!: The Story of E. B. White.

It's an awesome book

it's one of my favorite book's to read, next to Cinderella , and Dr.Suese....

The voice who reads Charlotte’s Web is wonderful. The book was purchased to read with my students. I am thankful to have an audio version of the book.

Charlotte's Web is a classic and my family enjoyed the Meryl Streep audio version.

The kids and I loved listening to this book! The voices were great and very fitting for the characters.

Nice, I thought it was good.

I’m so thankful to the wonderful actress Meryl Streep for giving me the best possible first meeting with this classic.