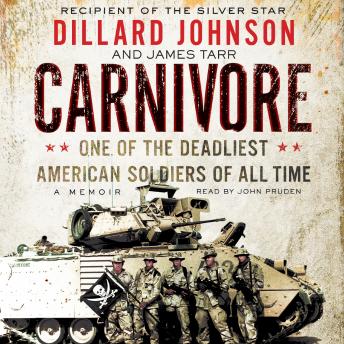 Carnivore: A Memoir by One of the Deadliest American Soldiers of All Time

Amid ferocious fighting that many times nearly took his life, Sergeant Dillard "C. J." Johnson and his crew are recognized by Pentagon reports to have accounted for astonishing enemy KIA totals while battling inside and out of the "Carnivore," the Bradley Fighting Vehicle Johnson commanded during Operation Iraqi Freedom. After miraculously beating stage-three cancer (caused by radiation exposure from firing armor-piercing depleted-uranium rounds during combat), he returned to his platoon in Baghdad for a second tour, often serving as a sniper protecting his fellow troops. Today, Johnson and his men's story is the stuff of legend—earning them a cover story in Soldier of Fortune and a display in the Fort Stewart Museum. But only now is Johnson telling his full story: reviewed and approved for publication by the Department of Defense, Carnivore is the gripping and unflinchingly honest autobiography of a remarkable American warrior.

"The estimated enemy KIAs for Staff Sergeant Johnson’s BIFV [Bradley Infantry Fighting Vehicle] during this fight [22 March, 2003] was 488. The informal estimate from the troop was that Johnson and his crew killed at least 1,000 Iraqis on 23 March. Later in the move north, Johnson engaged and destroyed 20 trucks and tallied 314 KIAs in the vicinity of An Najaf. At Objective FLOYD, Johnson’s platoon fought yet another bitter fight against what they claim was a thousand paramilitary troops. … Events were corroborated by separate interviews with the remainder of C/3-7 CAV, to include the troop commander." —On Point: The United States Army in Operation Iraqi Freedom, the official study of the 2003 invasion commissioned by the U.S. Army Chief of Staff

Carnivore: A Memoir by One of the Deadliest American Soldiers of All Time

This title is due for release on June 25, 2013
We'll send you an email as soon as it is available!