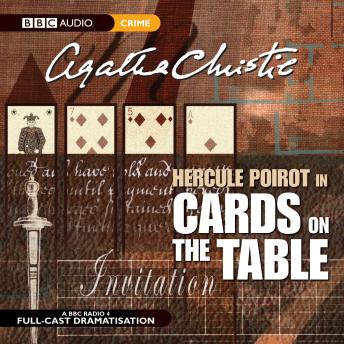 Cards On The Table

Hercule Poirot, along with three other luminaries from the world of crime detection, is invited to dinner by the renowned London socialite Dr Shaitana. Also on the guest list are four members of what Shaitana calls his Black Museum - a collection of murderers who have each succeeded in 'getting away with it'. An elegant dinner is followed by a game of bridge, in which Shaitana himself does not participated. But just after midnight, when the guests prepare to leave, they make a terrible discovery. Their host is dead in his armchair, stabbed in the chest. The four sleuths are thus faced with one murder and a quartet of likely suspects. Working both together and independently, they investigate the pasts of the Black Museum's finest in order to determine the most likely killer. Poirot finds that many hindrances and distractions are thrown in his way, as he attempts to read the meaning of the cards which each suspect has placed on the table. Agatha Christie's intriguing mystery is dramatised with a full cast including Stephanie Cole and Donald Sinden.

This title is due for release on September 10, 2010
We'll send you an email as soon as it is available!