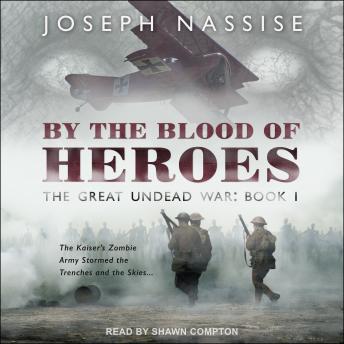 By The Blood of Heroes

When the American ace Major Jack Freeman-poster boy for the war against the Kaiser's undead army of shamblers-is shot down over enemy lines and taken captive, veteran Captain Michael 'Madman' Burke is the only man brave and foolish enough to accept the mission to recover him. Burke assembles a team of disparate members-his right-hand man, Sergeant Moore, big-game-hunter-turned-soldier Clayton Manning, and Professor Dan Graves, one of Tesla's top men and the resident authority on all things supernatural, among them-to dare the impossible. With the help of a highly advanced British dirigible war machine used to infiltrate enemy territory, the team will face incredible danger as it struggles to reach the prison camp and strike at the heart of the enemy.

Pitted against them is the most deadly enemy of all: Manfred von Richthofen, the Red Baron. Having risen from the dead with his physical abilities enhanced but his mind on the brink of madness, Richthofen has plans for victory that give no quarter to soldiers or civilians alike.

And he has plans for Major Freeman . . .