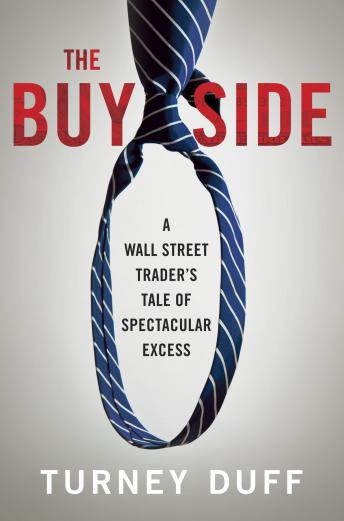 The Buy Side: A Wall Street Trader's Tale of Spectacular Excess

NEW YORK TIMES BESTSELLER • A former Galleon Group trader portrays an after-hours Wall Street culture where drugs and sex are rampant and billions in trading commissions flow to those who dangle the most enticements.

A remarkable writing debut, filled with indelible moments, The Buy Side shows as no book ever has the rewards—and dizzying temptations—of making a living on the Street.

Growing up in the 1980’s Turney Duff was your average kid from Kennebunk, Maine, eager to expand his horizons. After trying – and failing – to land a job as a journalist, he secured a trainee position at Morgan Stanley and got his first feel for the pecking order that exists in the trading pits.  Those on the “buy side,” the traders who make large bets on whether a stock will rise or fall, are the “alphas” and those on the “sell side,” the brokers who handle their business, are eager to please.

How eager to please was brought home stunningly to Turney in 1999 when he arrived at the Galleon Group, a colossal hedge-fund management firm run by secretive founder Raj Rajaratnam.  Finally in a position to trade on his own, Turney was encouraged to socialize with the sell side and siphon from his new broker friends as much information as possible.  Soon he was not just vacuuming up valuable tips but also being lured into a variety of hedonistic pursuits.  Naïve enough to believe he could keep up the lifestyle without paying a price, he managed to keep an eye on his buy-and-sell charts and, meanwhile, pondered the strange goings on at Galleon, where tens of millions were being made each week in sometimes mysterious ways.

At his next positions, at Argus Partners and J.L. Berkowitz, Turney climbed to even higher heights – and, as it turned out, plummeted to even lower depths – as, by day, he solidified his reputation one of the Street’s most powerful healthcare traders, and by night, he blazed a path through the city’s nightclubs, showing off his social genius and voraciously inhaling any drug that would fill the void he felt inside.

A mesmerizingly immersive journey through Wall Street’s first millennial decade, and a poignant self portrait by a young man who surely would have destroyed himself were it not for his decision to walk away from a seven-figure annual income, The Buy Side is one of the best coming-of-age-on-the-Street books ever written.

Buy Side: A Wall Street Trader's Tale of Spectacular Excess

This title is due for release on June 4, 2013
We'll send you an email as soon as it is available!