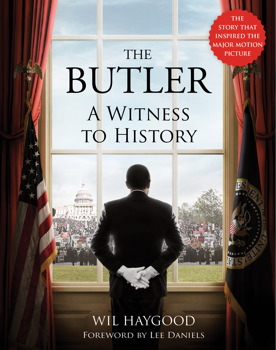 The Butler: A Witness to History

This mesmerizing companion book to the award-winning film, The Butler traces the Civil Rights Movement and explores crucial moments of twentieth century American history through the eyes of Eugene Allen—a White House butler who served eight presidents over the course of thirty-four years.

During the presidencies of Harry Truman to Ronald Reagan, Eugene Allen was a butler in the most famous of residences: the White House. An African American who came of age during the era of Jim Crow, Allen served tea and supervised buffets while also witnessing some of the most momentous decisions made during the second half of the twentieth century, including Lyndon B. Johnson’s work during the Civil Rights Movement and Ronald Reagan getting tough on apartheid. But even as Allen witnessed the Civil Rights legislation develop, his family, friends, and neighbors were still contending with Jim Crow America.

Timely, “poignant and powerful” (Kirkus Reviews) The Butler also explores Eugene Allen and his family’s background along with the history of African Americans in Hollywood and also features a foreword by the film’s director Lee Daniels.

The latter half of the book seems disconnected from the first part; I was also sad to learn that many of the facts from the books were twisted for Hollywood drama to make the movie

This book was extremely disappointing. Started out interesting and then went nowhere. I would definitely avoid it especially as there is a whole section that is a filler at the end that has no relevance

Disappointing!!! The book started out wonderful and interesting, after Oprahs reading it was no longer about the butlers interesting life but about cinema history- SNORE!!!!

This title is due for release on July 30, 2013
We'll send you an email as soon as it is available!