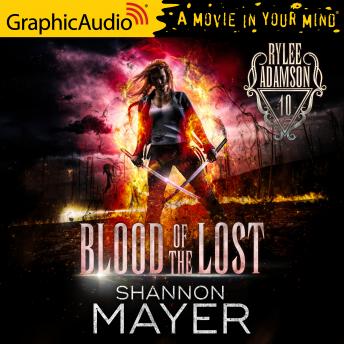 The epic conclusion to The Rylee Adamson series from New York Times Bestselling Author Shannon Mayer. ''My name is Rylee and I am a Tracker.'' When children go missing, and the Humans have no leads, I'm the one they call. I am their last hope in bringing home the lost ones. I salvage what they cannot. My final salvage, and this time I must rescue the entire world. Orion has fooled the entire human population with his lies, and they follow him like mindless zombies. They are the lost ones now. I have my allies and my loved ones with me, but while they will fight to their death, it is still not enough. I must seal the Veil closed and send the demons back forever. There is only one thing left for me to do. Face Orion alone. But Orion knows my weakness. And he has stolen her away leaving me with a choice no mother should ever face. Performed by Nora Achrati, Yasmin Tuazon, Chris Genebach, Shanta Parasuraman, Bradley Foster Smith, Christopher Williams, Karen Novack, Laura C. Harris, Colleen Delany, Ken Jackson, James Konicek, Chris Stinson, Lydia Kraniotis, Anthony Palmini, Matthew Bassett, Natalie Van Sistine, Amanda Forstrom, Mark Harrietha, Richard Rohan, Dawn Ursula, Holly Adams, Ryan Carlo Dalusung, Terence Aselford, Niusha Nawab, Robb Moreira, Rob McFadyen, Steven Carpenter, Eric Messner, Michael John Casey, Nanette Savard, Hannah Curtis, Triya Leong, Chris Davenport, Eva Wilhelm, Julie-Ann Elliott, Darius Johnson, Debi Tinsley, Nazia Chaudhry, Christopher Graybill, Catherine Aselford, Carolyn Kashner, and David Jourdan.