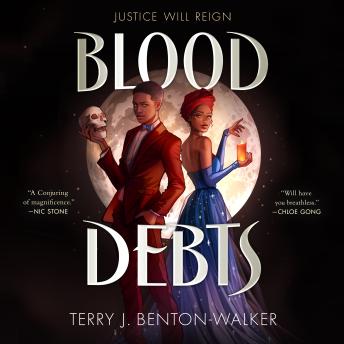 GODS MEDDLE AND MAGIC WILL BETRAY YOU, BUT THIS TIME JUSTICE WILL REIGN.

Thirty years ago, a young woman was murdered, a family was lynched, and New Orleans saw the greatest magical massacre in its history. In the days that followed, a throne was stolen from a queen.

On the anniversary of these brutal events, Clement and Cristina Trudeau—the sixteen-year-old twin heirs to the powerful, magical, dethroned family—are mourning their father and caring for their sick mother. Until, by chance, they discover their mother isn’t sick—she’s cursed. Cursed by someone on the very magic council their family used to rule. Someone who will come for them next.

Cristina, once a talented and dedicated practitioner of Generational magic, has given up magic for good. An ancient spell is what killed their father and she was the one who cast it. For Clement, magic is his lifeline. A distraction from his anger and pain. Even better than the random guys he hooks up with.

Cristina and Clement used to be each other’s most trusted confidant and friend, now they barely speak. But if they have any hope of discovering who is coming after their family, they’ll have to find a way to trust each other and their family's magic, all while solving the decades-old murder that sparked the still-rising tensions between the city’s magical and non-magical communities. And if they don't succeed, New Orleans may see another massacre. Or worse.

This title is due for release on April 4, 2023
We'll send you an email as soon as it is available!