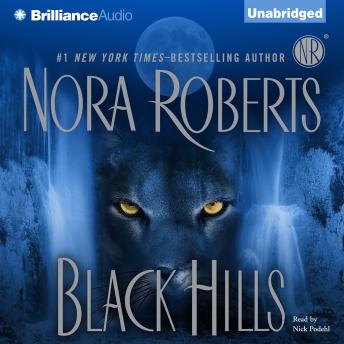 In this #1 New York Times bestseller, Nora Roberts takes readers deep into the rugged Black Hills of South Dakota, where the shadows keep secrets, hunters stalk the land, and a childhood friendship matures into an adult passion.

Cooper Sullivan spent the summers of his youth on his grandparents’ South Dakota ranch, sharing innocent games and stolen kisses with the neighbor girl, Lil Chance. Now, twelve years after they last walked together hand in hand, fate has brought them back to the Black Hills.

Coop has left his fast-paced life as an investigator in New York to take care of his aging grandparents and the ranch he has come to call home. Though the memory of his touch still haunts her, Lil has let nothing stop her dream of opening the Chance Wildlife Refuge, but something...or someone...has been keeping a close watch. When small pranks and acts of destruction escalate into a heartless attack on Lil’s beloved cougar, memories of an unsolved murder in these very hills have Coop springing to action to keep Lil safe.

Lil and Coop know the natural dangers that lurk in the wild landscape of the Black Hills. But a killer of twisted and unnatural instincts has singled them out as prey...

This one had me enthralled! I could visualize the animals so clearly. Just loved it.

I agree with other evals, this was boring. it started out good but dragged on unnecessary. The story was told halfway through. The editor should have done a better job cutting it down some and it would have been much better. I love this author, thus just didn't hit the mark.

I'm not finished with Black Hills, but so far it's boring but willing to give it a chance.

Boring, returned after 2 cd's and I rarely don't finish books

I thoroughly enjoyed Black Hills, in fact I was sorry when the book was over. I wanted the story to continue. The listening was made all the more enjoyable by the narration by Nick Podehl. His use of different voices for each of the characters was amazing. He is very talented. Nora Roberts story line and characters are very believable.

The love story and murders are predictable, but the story is fabulous. I loved the story line and characters and the narrator was absolutely splendid! It is a must read/listen.

Good Story but could have been done in 5 C-D's NOT 14. The only thing that keep me listening was the reader--he was fantastic!

Excellent, well developed book. It would be nice to have the story & characters continue in another book.

this story kept me on the edge of my seat for hours. I loved every minute

This title is due for release on July 7, 2009
We'll send you an email as soon as it is available!