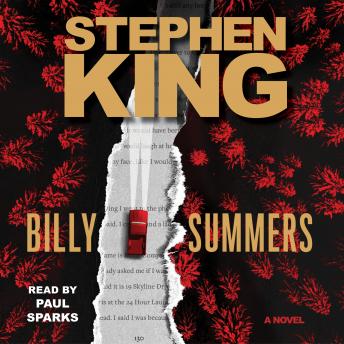 Master storyteller Stephen King, whose “restless imagination is a power that cannot be contained” (The New York Times Book Review), presents an unforgettable and relentless #1 New York Times bestseller about a good guy in a bad job.

Chances are, if you’re a target of Billy Summers, two immutable truths apply: You’ll never even know what hit you, and you’re really getting what you deserve. He’s a killer for hire and the best in the business—but he’ll do the job only if the assignment is a truly bad person. But now, time is catching up with him, and Billy wants out. Before he can do that though, there’s one last hit, which promises a generous payday at the end of the line even as things don’t seem quite on the level here. Given that Billy is among the most talented snipers in the world, a decorated Iraq war vet, and a virtual Houdini when it comes to vanishing after the job is done, what could possibly go wrong? How about everything.

Part war story and part love letter to small-town America and the people who live there, this spectacular thriller of luck, fate, and love will grip readers with its electrifying narrative, as a complex antihero with one last shot at redemption must avenge the crimes of an extraordinarily evil man. You won’t ever forget this stunning novel from master storyteller Stephen King…and you will never forget Billy.

I have always been a Stephen King fan, but I did not enjoy this book. I downloaded it for listening while driving cross country. The story developed at a tedious pace. I did not find it engaging during the long hours on the road. King has apparently developed an obsession with Trump, and unnecessarily politicized his characters in a manner that clearly reflected King's personal politics while adding nothing to the story. I would not recommend this book.

What a great book! I am glad to have purchased it! Billy Summers gives you a nice reprieve away from Stephen King’s typical storytelling. No ghosts, no ghouls, no sorcery of any kind! I would definitely recommend this book hoot to whoever loves Stephen King! The narrator did an awesome job as well! Definitely worth the read!

Not your usual Stephen King stuff, kind of boring! I'm 6 hours in and I need to give up. The story is flawed and there's no point in many of the things that happen.

King used to be one of my favorite authors but this is nothing more than a 16 hour chance to complain about Trump. King has clearly lost his marbles and is an activist now not an author.

very slow and boring. hated it

Not what I'd consider your typical Stephen King but I enjoyed every minute of his story!

Boy oh boy, Steven still has IT in spades. Another great story including drama and pathos. Really loved this book

Too politically biased as a matter of fact the politics was almost a distraction from the story.

This is an incredible novel. I couldn’t put it down. Paul Sparks was perfect. Will purchase a paper copy of this for my 82 year old mother, who read her first Stephen King novel, ‘The Outsider’, a couple weeks ago and loved it. She’ll love this one even more. My daughter will also receive a copy. She’s a fan of Stephen King already but hasn’t read this one yet.

The book was intriguing. I love Stephen King. the narrator was excellent.

I really enjoyed this one. Like many Steven King books, there can be small lulls as the characters develop and secondary storylines/narratives emerge this creating a more robust tale. Nevertheless, all in all a good read! The narrator was fantastic!!

I’ve never heard someone read an entire book holding their breath, that was wild. Narrator might’ve made the book bad for me, but I think I disliked the story equally. Definitely not one of King’s best pieces of work.

An interesting take from Stephen King. Not his typical novel. A good listen, a good read though, just the same

Good book and gets better towards the middle and end

This is one of the best book I've ever listened to! The narrator was exemplary!! He did such a great job with all the characters in the book. This is my very favorite Stephen King book. It's brilliantly written. The plot is entertaining and exciting I couldn't stop listening. I highly recommend this book!

The plot was faulty. Narrator was great. Don’t think I will read or listen to another book by this author.

This is an interesting listen to the very end. There’s no horror, just a solid tale.

Oh wow! I really loved this book! I m a big fan of Stephen King, and his writing. And this book really delivers! It was the kind of book that you wish never ended, totally relatable and authentic characters. Really draws you in and keeps you there!!! A

an awesome listen! Stephen King is the king!

I wanted to listen till the end in one sitting Billy was a great character. His pasts, present, and “ future” intertwining to draw you in… loved the narration!

Good book. Better toward the end. Narrator very good Billy and Alice good characters. Despite a review talking about politics this book has nothing to do with politics. An all around good story

Not scary but loved characters and narrator

I have never read or listened to a Stephen King book ever and I listen to 3- 5 books a week thank god for library my bank account can’t handle another habit. But this book was amazing not what my preconceived notions of what king writes about I couldn’t quit listening reader was great loved the characters and probably my pick of the year and I’ve listened to well over a hundred books so far last year my surprise favorite was the bill Clinton debut and this year a good bad guy that only kills bad people

I can’t wait to hear the rest of it

was a solid book to listen to, I enjoyed it as my first audio book, kept my attention and the narrator did a really good job

This book was intense. Something completely different for Stephen King, but fantastic non the less.

Billy will now be one of my favorite fictional characters. King has done it again! What a great story with wonderful characters. The narrator did a beautiful job giving each character their own voice which made the listening experience a joy. For those who have read or listened Billy Summer” I’m sure you will agree “ Fu…Marge.”

Although I liked it overall, I thought the story was underdeveloped in places. I'm not a fan of the "criminal with a heart of gold" trope either. Entertaining, but not competing for the greatest work of the author.

Until some glaring unbelievable actions by Billy near the conclusion, this was mostly entertaining. I find the excessive detail that I love in an actual read vs listen gets tiresome. Overall I would recommend this one.

wow....I'm at a loss for words! Amazing book, only wished Billy taught her to be a sniper.

Great book from start to finish.

A co-worker recommended this book. I'm glad she did. It was refreshing change for Stephen King novels. The man is so talented.

I have never read/heard a Stephen King novel before and the comments sound as if this story is unusual. I hope not, because I really loved it and thought I would try another one of his books. At first, I didn't think I would like the narrator because he tended to swallow some of his words, especially at the end of sentences. But after I got used to his voice, I thought he did a great job and had a good sense of who the character, Billy Summers, was.

My god, was this guy trying to whisper the entire book?

Loved this! I think Billy is one of my all time favorite characters of Stephen King.

One of his best books! Great story…..great narration.

Great book. Completely different than any of the other SK books I’ve read in the past. Couldn’t put it down. The narrator did a great job with all the characters voices- especially “Dumb Billy” and “Smart Billy”. I hated when it was was over- I wanted more. Thanks Mr. King for yet another great book. It will be a classic!!!

Best thing Mr King has written in years. Loved every moment. The narrator, as with most of Kings novels, is top notch. A thoroughly good time.

Really good. Subtly different from King's usual novels in my opinion. The deep dive into Billy’s thoughts as he works through his final ‘job’, remembering how he got there, and the brutal entry of Alice into the story, left me far more emotionally connected to these characters. The quiet nod to the Overlook also lets us peek in and see what the ol' girl is up to since she burned down. Narrator is really good throughout, one star off as it takes a couple chapters for him to really get into his stride.

Loved the narrator, but just another tired old revenge book.