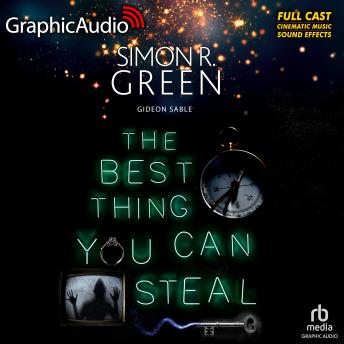 The Best Thing You Can Steal [Dramatized Adaptation]: Gideon Sable 1

Welcome to London, but not as you know it. A place where magics and horror run free, wonders and miracles are everyday things, and the dark streets are full of very shadowy people... Gideon Sable is a thief and a con man. He specializes in stealing the kind of things that can't normally be stolen. Like a ghost's clothes, or a photo from a country that never existed. He even stole his current identity. Who was he originally? Now, that would be telling. One thing's for sure though, he's not the bad guy. The people he steals from always have it coming. Gideon's planning a heist, to steal the only thing that matters from the worst man in the world. To get past his security, he's going to need a crew who can do the impossible ... but luckily, he has the right people in mind. The Damned, the Ghost, the Wild Card ... and his ex-girlfriend, Annie Anybody. A woman who can be anyone, with the power to make technology fall in love with her. If things go well, they'll all get what they want. And if they're lucky, they might not even die trying... Performed by Christopher Walker, Scott McCormick, Jenna Sharpe, John Kielty, Rayner Gabriel, Terence Aselford, Henry Kramer, Holly Adams, Peter Holdway, Kay Elúvian, Rob McFadyen, Eric Messner, Lydia Kraniotis and Michael John Casey.