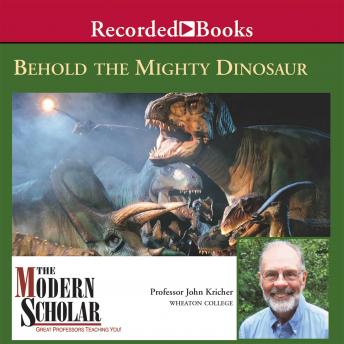 Dinosaurs-the word means 'fearfully great reptile'-have been a source of fascination ever since their discovery in England early in the nineteenth century. Aside from birds, all dinosaurs have been extinct for 65 million years, yet, before then, they dominated Earth's terrestrial habitats for about 160 million years, far longer than primates, or humans, have been around. Dinosaurs present the ultimate puzzle in forensic science, but we have learned a great deal about them, especially in the last fifty years. Our view of dinosaurs has changed radically, and the evolution and biology of dinosaurs has become a popular topic in college curriculums. This lecture series will explain how this changing view of dinosaurs developed, the evolutionary and ecological relationships among dinosaurs, what it might have been like to be present in the Mesozoic Era during the time of the dinosaurs, and the question of what ultimately brought about the total extinction of all of the non-bird dinosaurs and the end of the Cretaceous Period. Although extinct, dinosaurs have never been more a focus of science than they are today.

This title is due for release on September 12, 2008
We'll send you an email as soon as it is available!