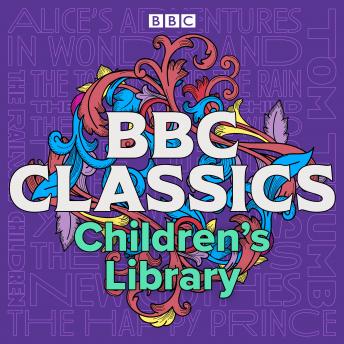 BBC Classics Children’s Library: A timeless collection of 21 tales for all ages

An irresistible anthology of folklore, fables and perennial favourites, including four novels and 17 short stories

This superlative collection of children's stories brings together a feast of fantastic fiction, read in full by a host of top narrators and with a comprehensive track listing for ease of listening. Comprising everything from fairytales for little ones to thrilling adventures for pre-teens, these unabridged readings are ideal for families to keep, treasure and dip into as their children grow.

Listed by suggested age range and with track numbers provided, the stories are as follows:

Produced by Simon Richardson (Alice's Adventures in Wonderland, The Tortoise and the Rain, The Elephant's Child, The Ants and the Treasure, How the Rhinoceros Got His Skin, How the Camel Got His Hump, The Elves and the Shoemaker, The Happy Prince), Karen Holden (The Wind in the Willows), Martha Littlehailes (The Call of the Wild), Anne Bunting (The Railway Children), Anne Isger (Too Clever By Half, The Tongue Cut Sparrow, The Emperor's New Clothes, The Children's Joke, Finn and the Scottish Giant) and Mabel Wright (Tom Thumb, The Raspberry Worm, The Magic Bed, The Baba Yaga, Peter Rabbit)
The Raspberry Worm edited by Andrew Lang

This title is due for release on June 3, 2021
We'll send you an email as soon as it is available!