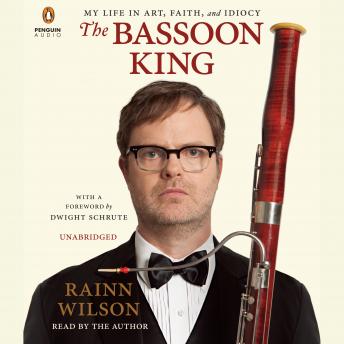 The Bassoon King: My Life in Art, Faith, and Idiocy

Rainn Wilson’s memoir about growing up geeky and finally finding his place in comedy, faith, and life.

For nine seasons Rainn Wilson played Dwight Schrute, everyone's favorite work nemesis and beet farmer. Viewers of The Office fell in love with the character and grew to love the actor who played him even more. Rainn founded a website and media company, SoulPancake, that eventually became a bestselling book of the same name. He also started a hilarious Twitter feed (sample tweet: “I'm not on Facebook” is the new “I don't even own a TV”) that now has more than four million followers.

Now, he's ready to tell his own story and explain how he came up with his incredibly unique sense of humor and perspective on life. He explains how he grew up “bone-numbingly nerdy before there was even a modicum of cool attached to the word.” The Bassoon King chronicles his journey from nerd to drama geek (“the highest rung on the vast, pimply ladder of high school losers”), his years of mild debauchery and struggles as a young actor in New York, his many adventures and insights about The Office, and finally, Wilson's achievement of success and satisfaction, both in his career and spiritually, reconnecting with the artistic and creative values of the Bahá’í faith he grew up in.

I absolutely LOVED this book. Great book written and read by a great human being!

Really changes the way you view Rainn Wilson but also comedic actors in general. Behind Dwight there is a very intelligent, caring, humble, talented man with a great story to tell. In real life he is really nothing like Dwight which is a testament to his incredible acting talents. Highly recommended!

Loved this book. Uplifting and inspiring. Love what Rainn has done with Soul Pancake. He offers great advice on marriage, life, career, spirituality. It's a good read and a good laugh!

Best audiobook I've gotten from this site so far (out of about 15). Rainn is an authentic person with a great story to share.

Engaging, intriguing, and fantastically written memoir. An excellent read for those who love The Office, Rainn Wilson, and unicorns with multiple personality disorders. Sidenote...unicorns were never mentioned in this books, but are referenced through literary devices and subtle innuendos. Please read with an open mind, heart, and with a sense of ironic abandonment.

Great book, well written and extremely well read. Rainn's life journey is unexpected and full of lessons we can all relate to and benefit from.

This title is due for release on November 10, 2015
We'll send you an email as soon as it is available!