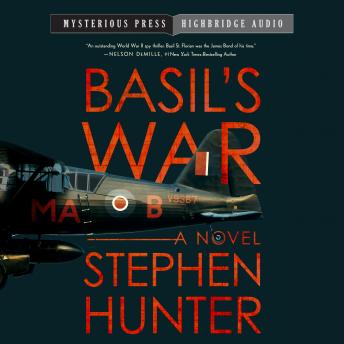 Basil St. Florian is an accomplished agent in the British Army, tasked with dozens of dangerous missions for crown and country across the globe. But his current mission, going undercover in Nazi-occupied France during World War II, might be his toughest assignment yet. He will be searching for an ecclesiastic manuscript that doesn't officially exist, one that genius professor Alan Turing believes may hold the key to a code that could prevent the death of millions and possibly even end the war.

St. Florian isn't the classic British special agent with a stiff upper lip-he is a swashbuckling, whisky-drinking cynic and thrill-seeker who resents having to leave Vivien Leigh's bed to set out on his crucial mission. Despite these proclivities, though, Basil's Army superiors know he's the best man for the job, carrying out his espionage with enough charm and quick wit to make any of his subjects lower their guards.

Action-packed and bursting with WWII-era intrigue (much of which has basis in fact), Basil's War is a classic espionage thriller from Pulitzer Prize-winning critic, essayist, and bestselling novelist Stephen Hunter.

Was particularly a fan of the format in which the author crafted a "briefing" and "mission" back and forth that really added to the pacing of the book. Narrator did a nice job on Basil, assembled admirals and generals and even Professor Turing. Depiction of inter-service rivalry between the SS and Abwehr rendered in a realistic fashion. A good selection for those seeking something shorter and less strenuous than some other offereings.

An excellent & enjoyable story well put together in which you feel almost as though you were there watching! I thought the way the mission briefings were gone over added to the suspense and 'thrill of the chase'....quite gripping at times! Very much recommended for history buffs who like a factual yet action packed story....full marks & will listen to it again!

Liked it but was short and could have used a little more plot development. Actor reading the book was okay but a little terse. He was British and had an accent so I guess that’s all that matters. I would have expected someone a little more suave sounding. Overall a fun listen.

Loved Basil, wish spent more time on character development. Could have been much longer and better I believe.