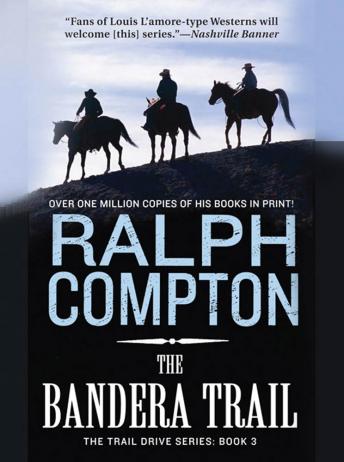 The only riches Texans has left after the Civil War were five million maverick longhorns and the brains, brawn and boldness to drive them north to where the money was. Now, Ralph Compton brings this violent and magnificent time to life in an extraordinary epic series based on the history-blazing trail drives.

Set on rescuing their old friend Clay Duval who is trapped inside war-torn Mexico, Gill and Van Austin, nephews of Texas founder Stephen Austin, cross the border after him and soon discover half of Mexico's army wants them dead. Taken prisoner by Santa Anna's soldiers, the brothers make a daring escape and head into Durango country, where they stumble on a valley full of longhorns--and a chance to build a future north of the border. All they have to do now is break Duval out of prison and drive the cattle to safety.

But faced with outlaws, soldiers and the cunning plans of a beautiful woman, the Austins are finding out that this isn't a trail drive, it's a war to reach the Bandera Range alive. And the only way to do it is the Texan way--figting for every bloody, dusty mile ahead.

This title is due for release on August 16, 2011
We'll send you an email as soon as it is available!