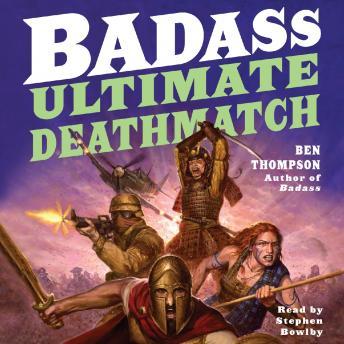 Unstoppable true stories of the most hardcore showdowns, last stands, and military engagements of all time! When only one can live, it's an Ultimate Deathmatch!

This ain't no table tennis. You're not here to skip rope with your niece. You're here to witness the catastrophically awesome exploits of history's greatest badasses. Not only that, you're here to see what happens when badasses collide, when glory and doom hang in the balance, when two men enter one man leaves. If you dare listen, you'll hear the stories of . . .

Cyrus the Great
The king who forged the Persian Empire with blood, steel, and a few thousand rampaging camels

St. Moses the Black
The Patron Saint of Asskickings, who taught bandit thugs a lesson in turning the other cheek

The War of Aracau
The only successful indigenous resistance to Spanish colonization, led by a Mapuche warrior who strapped blades to his arms after the conquistadors sawed off his hands

The Charge of the Australian Light Horse
Eight hundred horsemen armed with bayonets embark on the last great cavalry charge in history, rushing toward trenches filled with machine guns, rifles, and huge bullets

This title is due for release on March 12, 2013
We'll send you an email as soon as it is available!