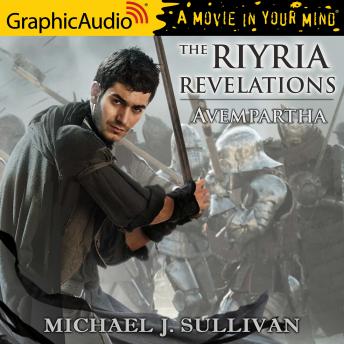 THE SECRET IS IN THE TOWER. THE PROBLEM IS THE BEAST. THE ANSWER IS TWO THIEVES.

When a destitute young woman hires Royce and Hadrian to help save her remote village from nocturnal attacks, they are once more drawn into the schemes of the wizard Esrahaddon. While Royce struggles to breech the secrets of an ancient elven tower, Hadrian attempts to rally the villagers to defend themselves against the unseen killer. Once more, what begins with the simple theft of a sword places the two thieves at the center of a firestorm -- but this time the outcome could change the future of Elan.

Avempartha is the second of a six book series entitled the Riyria Revelations. This saga is neither a string of sequels nor a lengthy work unnaturally divided. Instead, the Riyria Revelations was conceived as a single epic tale told through six individual episodes. While a book may hint at building mysteries or thickening plots, these threads are not essential to reach a satisfying conclusion to the current episode--which has its own beginning, middle, and end.