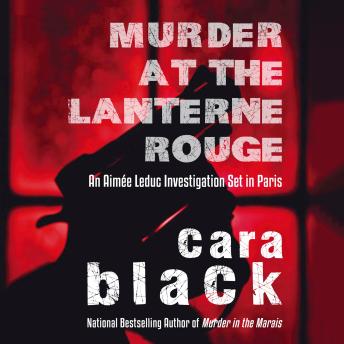 An Aimée Leduc Investigation, #12: Murder at the Lanterne Rouge

AiméeLeduc is happy that her long-time business partner René has found a girlfriend.Really, she is. It's not her fault if she can't suppress her doubts about therelationship; René is moving way too fast, and Aimée's instincts tell herMeizi, this supposed love of René's life, isn't trustworthy. And her misgivingsmay not be far off the mark. Meizi disappears during a Chinatown dinner to takea phone call and never comes back to the restaurant. Minutes later, the body ofa young man, a science prodigy and volunteer at the nearby Musée, is foundshrink-wrapped in an alley-with Meizi's photo in his wallet.
Aiméedoes not like this scenario one bit, but she can't figure out how the murder isconnected to Meizi's disappearance. The dead genius was sitting on a discoverythat had France's secret service keeping tabs on him. Now they're keeping tabson Aimée.
Amissing young woman, an illegal immigrant raid in progress, botched affairs ofthe heart, dirty policemen, the French secret service, cutting-edge science secrets,and a murderer on the loose-what has she gotten herself into? And can she getherself-and her friends-back out of it all alive?

An Aimée Leduc Investigation, #12: Murder at the Lanterne Rouge

This title is due for release on March 6, 2012
We'll send you an email as soon as it is available!