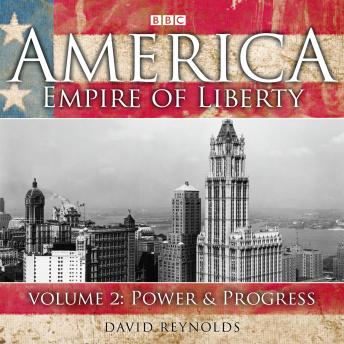 This epic narrative tells the saga of the United States through the voices of those who lived it - Presidents and farmers, mothers and children, settlers and soldiers, immigrants and native Americans. In Power & Progress, the second series of thirty episodes, Reynolds depicts the tragedy and heroism of the Civil War (1861-65), which finally ended slavery, though not racial discrimination; and the dynamism of the reunited nation as it grew into an industrial giant. World War One made America a force on the world stage but then the country lost its way, and its nerve, in the Depression, only for another World War to turn it into a nuclear superpower by 1945. This is also the story of how ordinary Americans lived, worked and had fun - with fascinating snapshots of H.J. Heinz, Buffalo Bill, skyscrapers, baseball, the Flappers and Gone With the Wind. 'Reynolds's presentation combines enthusiasm with authority, and his insightful and far-ranging text is augmented by a wealth of archive voices, from speeches to people in the street' - The Oldie. 'Reynolds's vigorous presentation of his sweep of American history, and the interwoven voices and news reports of the time, make for striking immediacy' - Observer.

This title is due for release on March 2, 2009
We'll send you an email as soon as it is available!