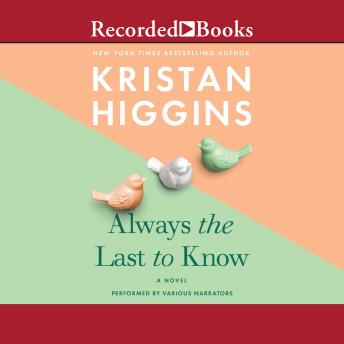 Always the Last to Know

Sometimes you have to break a family to fix it. From New York Times bestselling author Kristan Higgins, a new novel examining a family at the breaking point in all its messy, difficult, wonderful complexity. The Frosts are a typical American family. Barb and John, married almost fifty years, are testy and bored with each other ... who could blame them after all this time? At least they have their daughters-Barb's favorite, the perfect, brilliant Juliet; and John's darling, the free-spirited Sadie. The girls themselves couldn't be more different, but at least they got along, more or less. It was fine. It was enough. Until the day John had a stroke, and their house of cards came tumbling down. Now Sadie has to put her career as a teacher and struggling artist in New York on hold to come back and care for her beloved dad-and face the love of her life, whose heart she broke, and who broke hers. Now Juliet has to wonder if people will notice that despite her perfect career as a successful architect, her perfect marriage to a charming Brit, and her two perfect daughters, she's spending an increasing amount of time in the closet having panic attacks. And now Barb and John will finally have to face what's been going on in their marriage all along. From the author of Good Luck with That and Life and Other Inconveniences comes a new novel of heartbreaking truths and hilarious honesty about what family really means.

Always the Last to Know