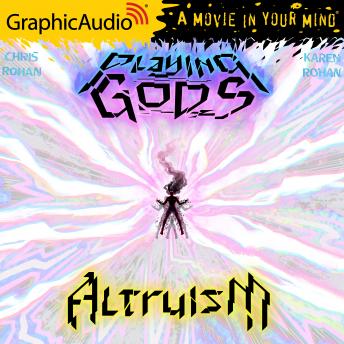 'Playing Gods is a spectacularly action-packed cosmic fantasy series, laced with edgy humor, social satire and imaginative world-building. Xriah and Vylis, two warriors with diametrically opposed morality and empowered with superhuman abilities to match, are repeatedly thrust into wildly varying worlds to savagely do battle on behalf of their respective deities. Themes, concepts and tropes from the genres of gaming fantasy are reinterpreted and explored in depth in Playing Gods, with complex emotional consequences for the beings who just might live in such a reality.

Dragonball Z meets Game of Thrones, with a dose of the anarchic meta-humor of Deadpool.

Playing Gods: Altruism is Book Three of the series. When his virtuous opponent turns even more callous than he is, Vylis, the ostensible bad guy and playfully psychopathic audience favorite, begins to smell a rat in the walls and starts punching holes in his carefully constructed reality to see what’s really on the other side. The creator of that reality will not be pleased.